The Feeling of Not Enough 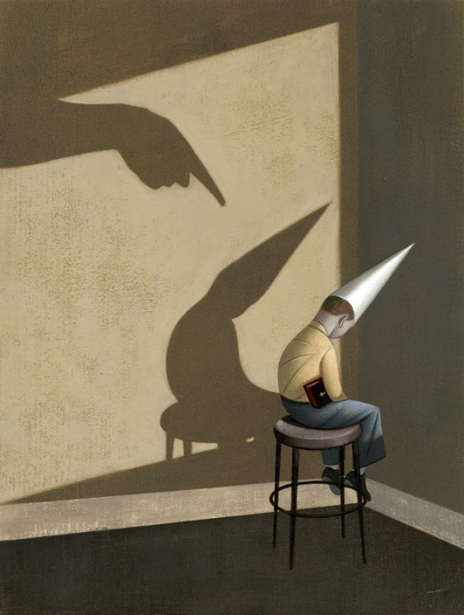 Manager’s note: another great post from therapist and writer Hilary Jacobs Hendel, originally published back in July. Many people carry the same wounds Mike has. Kids impacted by trauma carry them at least a thousand-fold. This post helps understand how they feel and gives ideas of tools can help. Click here to learn more about Hilary’s work on The Change Triangle and her forthcoming book, It’s Not Always Depression, from Random House Press.

Mike believed he had a good life and felt lucky for all the things he had. He was married to a loving wife, had agood job, owned a nice house, and had 3 healthy kids.

“Could I get you curious about this part of you that feels inadequate?” I asked Mike at our initial meeting. After he consented, I suggested, “Let yourself travel back in time…back and … back and … back. How old were you when you first felt not enough?” I asked him.

He paused to reflect, “It’s definitely been with me a long time,” He said. “Maybe 6 or 8 years old? Around there.”

Mike’s father became extremely successful when Mike was 6 years old. Because of his father’s new job, his family moved to an exotic country where they didn’t speak English. Mike was scared and felt like a stranger. Even though he attended an international school, he had no friends for a long time. His parents pushed him hard. They meant well and were trying to encourage him. But feeling scared and overwhelmed by the many changes in his life, he misinterpreted their words as disappointment that he wasn’t enough–it was the familiar feeling he still had today.

We are not born feeling inadequate. Life experiences and emotions create that sense within us in a variety of creative ways. For example, when we were little and we felt afraid or anxious, our mind told us something was wrong with us, not with our environment. That’s why children who were abused or neglected grow up to be adults who carry so much shame. A child’s mind, not yet rational, concludes, “There must be something wrong with me if I feel so bad” or “I must be bad if I’m being treated badly.”

As adults, armed with education on emotions and how childhood adversity affects the brain, we can understand that feeling not enough is a byproduct of an environment that was insufficient. We are in fact enough! Yet to feel more solid in our Self, we must work to transform the not enough feeling.

One way to transform old beliefs is to work with them as separate child parts. With some mental energy, we can externalize ailing parts of us and then relate to them in healing ways.

For example, I asked Mike, “Can you imagine that your 6-year old self, who feels not enough, is sitting on my sofa over there so we can be with him and try to help?

I paused while Mike exerted the mental energy it took to visualize his child part with some distance, “What does that 6-year-old part of you look like? What do you see him wearing? Where do you see him? Is he in a specific memory?” I asked.

With practice, Mike learned to connect and communicate to that part of himself. Mike learned to listen to that little boy inside. Offering it compassion helped him feel much better, even though he had struggled with the concept initially.

I also suggested to Mike that feeling not enough might be a defense against his deeper emotions towards others who had hurt him or not been there for him when he needed support. Thinking about The Change Triangle, we slowed down to notice his feelings towards himself and his parents. Without judging his core emotions as right or wrong, he accepted that he was angry at his father for uprooting him, a move that had cost him his confidence.

Since emotions are physical sensations, another way to work with wounded parts is through the body. Mike learned to recognize how not enough felt physically. “It is like an emptiness—like a hole inside. I know I have been successful at times and I believe my family loves me. Emotionally, it doesn’t feel that way at all.  Good stuff comes in but it goes right through me like a bucket with a hole. I’m never filled.”

To help patch the hole in his bucket, I also helped Mike develop his capacity to hold onto good feelings by noticing them. “If you validate your accomplishments what does that feel like inside?”

“Can you stay with the feeling of being taller for just 10 seconds?”  I asked.

Like a form of training, he built his capacity to experience positive feelings. Going slowly, we practiced noticing sensations associated with pride, love, gratitude, and joy, getting used to them a little at a time.

What else can Mike and all of us do in the short run to help the parts of us that feel not enough?

In the long run, we heal the parts of us that feel inadequate by first becoming aware of them. Once aware, we listen to them and try to fully understand the story of how they came to believe they were not enough. Over time, by naming, validating and processing the associated emotions both from the past and present, the frequency and intensity of our not enough parts diminishes.

Mike learned to feel and move through the buried anger he had towards his parents both for moving and for not noticing how much he struggled. He validated the pain and sadness for what he went through without judging whether he was entitled to his feelings. When his wife hugged him and praised him for being such a great dad, he took in her love and praise as deeply as possible. He accepted himself during the times when he was too tired to fight against the feelings of not enough. By educating himself on emotions and how the brain is affected by childhood adversity, Mike learned that everyone struggled. No one is perfect, not even his father. When all else failed, just this thought brought him peace and reminded him that he was enough.

Hilary Jacobs Hendel, LCSW, is author of the book, It’s Not Always Depression: Working the Change Triangle to Listen to the Body, Discover Core Emotions, and Connect to Your Authentic Self (Random House, Feb. 2018). She received her BA in biochemistry from Wesleyan University and an MSW from Fordham University. She is a certified psychoanalyst and AEDP psychotherapist and supervisor. She has published articles in The New York Times and professional journals. Hendel also consulted on the psychological development of characters on AMC’s Mad Men. She lives in New York City. For more information and free resources for mental health visit: https://www.hilaryjacobshendel.com/ Twitter: @HilaryJHendel Instagram: thechangetriangle YouTube Channel: The Change Triangle