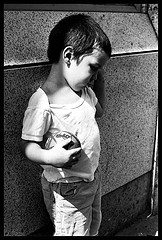 Driving to school this morning my youngest (chronological age 11, emotional age – always open for debate) and I were discussing her father’s upcoming business trip to Asia. Pulling up to a stoplight, I glanced sideways and did a quick check of her demeanor. While she has gotten much better in the past few years about family members coming and going in her life, I still try to be on the lookout for signs that an upcoming loss – albeit a temporary one – might flip her internal emotional balance on its end. “Trigger her” as we say in the therapeutic parenting business.

All seemed to be clear. But I laid the usual ground work anyway.

She: “Are you driving him?”

Hmm, sounds like she might want to come. Fine with me.  Luckily her school is understanding and knows our situation.

She: “Oh good! I don’t want him leaving the ‘awesome van’ (her name for her Dad’s mode of transport) in the airport garage. I don’t think I could face losing another one.”

“Wow!” I thought, “She is worried about losing Dad’s car.” She still thinks about his other car. The car we lost this summer. The family car that had been affectionately called, “Dad’s awesome car.” The car that my eldest had driven to her summer job until she was hit one day by a semi on a country road not far from our home. The car that our youngest had planned to drive in six years when she was finally old enough – never mind that we weren’t sure there would be a car left to drive by then. The car that she had witnessed all crunched to pieces when she had to accompany me in a panic-fueled drive to the accident scene after her oldest sister called me sobbing. The car that her dear sister could have been crushed in, could have been delivered into the arms of a screaming ambulance in had an angel not been on her shoulder that clear, hot summer morning. The car that we had to tell Dad was lost as he stepped off the plane that night from China after three long weeks away.

Me: “Nope.  No car getting left at the airport.  All home safe in our garage while Dad is gone.”
I rechecked her demeanor as the traffic light changed. All seemed calm. Emotional triggers nicely packed back away, I eased up off the gas and continued on toward school.

Sadly, even with ten years of experience of trigger watching, I was looking in the wrong direction this morning, for as we inched toward her school in the rapidly thickening traffic we came upon an accident scene that well surpassed her sister’s. There on a quiet suburban street a mile from three schools was an older model SUV on its roof, mangled but still intact. And there beside it stood a teenage boy in a bright polo shirt and basketball shorts on his cell phone, most likely calling home.

My mind moved rapidly into damage control as I tried to keep my eyes on the road, but sensed the increasing tension beside me.

Me: “Aw. How scary! (Name the feelings). Thank God everyone seems okay. See the boy is outside the car and standing there on the phone. (Note the positives) And the police are here to help him. (Point out the safety features) We should say a prayer for him. (Remind her that God is with her and all)”

She: “How is that possible? I didn’t know that could happen!!” The utter amazement and fear upon learning yet another horrible thing that can happen in life erupts from her.

Me: “Yes, sadly it can happen on wet roadways. And if the boy was going too fast and the jeep was too top heavy it can flip over.”

Me: “He climbed out. I saw the window was broken so he probably climbed right out.”

I paused. I breathed. I waited for the next question. With her hypervigilence she would have noticed one hundred things about the accident that my non-trauma-born brain would miss every time.
But the questions had stopped, replaced by a flood of sobbing tears, streaming down her stunned face.

She: “I can’t go to school!” Translation, “I need to be with you to feel that things are safe.” Tears are pouring down her face.

I drive right on by her school and soothe her by offering that she can stay with me, come to my physical therapy appointment with me, and when she is ready we can head back over to school. We pull around the block to regroup and I do another emotional check.  She is still crying but the tears are subsiding. The tension is easing. As we pull out to head toward my appointment, she quietly says, “its okay. I can go.” I question her, making sure that is what she wants, reassuring her that it is okay if she needs some time, but she decides to go and I pull back around to drop her, making sure to give her an extra tight squeeze, knowing that her sensory-seeking-stressed-out soul needs it.

Then I pull away, amazed that even after all these years the “L” word still messes with her emotional stability. She still fears loss. Loss of family possessions that she loves and has come to depend on for their permanence. Loss of family members, either temporarily as they travel away from her and come back or even perhaps permanently in tragedies such as car accidents. Loss of innocence, in learning that the world is not always safe and predictable and things can change on a dime, no matter how hypervigilent you are.

Loss echoed through her early days and months in China and loss continues to whisper to her.